Sen. Chuck Grassley: Trump can get rid of wind energy ‘over my dead body’

Sen. Chuck Grassley: Trump can get rid of wind energy ‘over my dead body’ 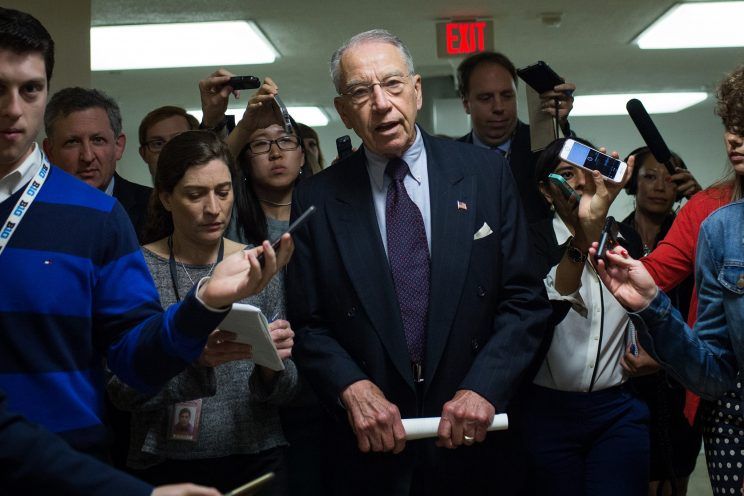 Reporter
Yahoo News
Donald Trump has railed against wind energy for years, but he’d face a backlash from members of his own party if he wins the White House and his administration pushes too hard on the issue.

Sen. Chuck Grassley, R-Iowa, the author of the original wind energy tax credit in 1992, said a hypothetical President Trump wouldn’t be able to get rid of wind power in the U.S. as long as he’s alive. The GOP nominee has railed for years that wind farms are “ugly,” “obsolete” and “terrible for the environment,” among many other criticisms.

“If he wants to do away with it, he’ll have to get a bill through Congress, and he’ll do it over my dead body,” Grassley said Tuesday in an interview with Yahoo News.

Throughout President Barack Obama’s tenure in the Oval Office, electricity production from wind power in the U.S. has tripled, according to the industry’s major trade association.

The American Wind Energy Association (AWEA), a trade group representing the industry, told Yahoo News exclusively that the nation’s installed wind power capacity has reached a milestone of 75 gigawatts, which is enough to power 20 million American homes with electricity.

Grassley said when the wind energy tax credit was first developed in the late 1980s and early 1990s, everyone believed that the U.S. was going to run out of fossil fuels, in particular petroleum and natural gas.

“We knew it had environmental benefits that were very important, but I would say making sure we were more energy independent was the most important reason for supporting all forms of alternative energy,” Grassley continued. “When I got it passed, I didn’t know it would be the big thing it is today, where 31 percent of the electricity in Iowa comes from wind.”

For Iowans, he said, wind energy has created many jobs in construction, manufacturing and maintenance — and it supplements the incomes of farmers. The senator also said alternative energy sources bolsters U.S. national security, as it makes the country less dependent on the volatile Middle East.

According to Grassley, current members of his own party are mistaken when they cite small-government principles to argue that the U.S. should not subsidize wind energy. Those Republicans do not understand the environment from which the wind energy tax credit grew, and they should let the industry grow to maturity before phasing the incentive out, he said.

“Everything about alternative energy is good, good, good, good,” he said. “You’ve got a whole batch of new Republicans in town, and they take the position that government shouldn’t pick winners and losers, but they weren’t around back in the ’80s and early ’90s when we thought we were going to run out of it.”

According to the data provided by AWEA, at the end of 2008, when Obama was first elected president, installed wind power capacity in the United States was 25,065 megawatts — but now it’s 75,221 megawatts, or more than 75 gigawatts.

“That’s been some exciting growth,” Tom Kiernan, CEO of the AWEA, said in a phone interview with Yahoo News. “President Obama and his administration have been strong supporters of wind energy, as have Republicans and Democrats up on Capitol Hill. It’s been the combination of strong policy support from the administration and from Congress.”

Obama has presented himself as a clean-energy president who embraces an “all-of-the-above energy strategy” for advancing wind and solar energy, producing domestic oil and gas responsibly, and developing clean fuels, among other policies.

Democratic presidential candidate Hillary Clinton is similarly bullish on renewable energy. But her competition, Republican candidate Trump, is adamantly anti-wind energy and has said climate change is a hoax concocted by the Chinese to hurt American manufacturing.

In dozens of tweets, Trump has also expressed concern for the purported “wind-turbine syndrome” and the birds killed in turbines. He’s also called turbines ugly and alleges that they destroy the environment.

If Obama keeps pushing wind turbines our country will go down the tubes economically, environmentally & aesthetically.

Studies have indeed found turbines a serious threat to bats and birds, which can lead to negative consequences for local economies. The New York Times reported that bats are natural predators of insects, for example, and that a 2011 study concluded that increased bat deaths can cost billions in crop losses.

But Trump’s concern for birds might be motivated partially out of self-interest: He unsuccessfully sued a wind farm in Scotland in 2013, arguing that it would ruin the views from his luxury golf course in the country.

Upon learning about the proposed windmills in 2006, he told BBC News, “I am not thrilled — I want to see the ocean, I do not want to see windmills.”

Though wind’s recent success appears to be a feather in Obama’s cap, supporters of wind energy have been quick to point out that its growth in electricity production is the accomplishment of both Democrats and Republicans. They say that wind energy is — and should be — a bipartisan issue.

Michele Combs, the chairwoman and founder of Young Conservatives for Energy Reform, said she embraced wind energy after she became pregnant and realized she had to avoid fish that had been contaminated with mercury by coal-burning power plants.

“I was baffled that as a conservative we were not more involved in this issue,” Combs told Yahoo News. “Our No. 1 goal is energy independence and to be out of the Middle East. We’re over there in countries that harbor terrorists and do not like us. … Second, we want to have a safer, cleaner environment for future generations and for our children.”

Combs hopes that her grassroots movement will percolate throughout the Republican Party and change policy at the top. She said, “We know that clean energy is the future of our party.”

Though boosters like the U.S. Environmental Protection Agency have praised Obama’s efforts to shift more energy infrastructure to wind farms, those efforts are not without their passionate critics.

According to the American Petroleum Institute (API), a national trade association that represents the oil and natural gas industry, the Obama administration ignores the current importance of natural gas, nuclear power and hydroelectric power and their potential. The API accuses the Clean Power Plan of steering “the American electricity sector toward an off-roading adventure down an uncertain path with an unclear future.”

“Our nation is leading the world in the production of oil and natural gas and in the reduction of carbon emissions, which are near 20-year lows. Americans overwhelmingly understand that the wind doesn’t always blow and the sun doesn’t always shine and that an all of the above energy strategy is needed to power our future,” Michael Tadeo, a spokesman for the API, said to Yahoo News. “This includes the use of reliable, affordable, clean-burning natural gas that complements a strategy to provide both the reliability and flexibility needed to support a growing renewables component in power generation.”

The U.S. Energy Information Administration, a federal agency that provides energy statistics, reported that the U.S. generated about 4 trillion kilowatt-hours of electricity in 2015. About 67 percent of the electricity was generated from fossil fuels — coal, natural gas and petroleum.

The Independent Petroleum Association of America, a trade group for oil and gas producers, was not immediately available for comment.

Zachary Gunsolley, the county engineer for Ringgold County, Iowa, said he got interested in wind energy for financial reasons. His annual budget is more than $4 million, and he has seen other counties nearby receive a financial windfall of $5 million per year in addition to their regular revenue, thanks to the wind energy industry, he said.

“So that would be more than double: a shot in the arm for the investment in my local roads and bridges. It would be huge,” he told Yahoo News. “This is why I am so interested in wind power from a road department perspective.”

Gunsolley said he saw other counties solve road-infrastructure problems that are similar to those that Ringgold County currently faces but has not yet been able to surmount “because of the almighty dollar.”

He lives in Iowa’s Third Congressional District, which has the tallest land-based wind turbine in the U.S. It is also among the top 20 congressional districts for installed wind power.

Steve Lockard, who serves on the AWEA board, is the CEO of TPI Composites, a global wind-blade manufacturing company based in Iowa. He said he’s pleased that the levelized cost of wind energy has come down 61 percent over the last six years.

“I think many people are starting to take note that wind is becoming a larger percentage of our electricity-generation equipment,” he said to Yahoo News. “And it’s much more cost-effective than it once was.

Three years ago, Trump predicted that no one would be building wind turbines by 2016.

In three years people won’t be building wind turbines anymore – they are obsolete & totally destroy the environment in which they sit.

This has not come to pass. In fact, AWEA’s Kiernan said wind generates 5 percent of the country’s electricity right now; he thinks it’s likely to reach 10 percent by 2020.